And what about inflation?

And what about inflation? 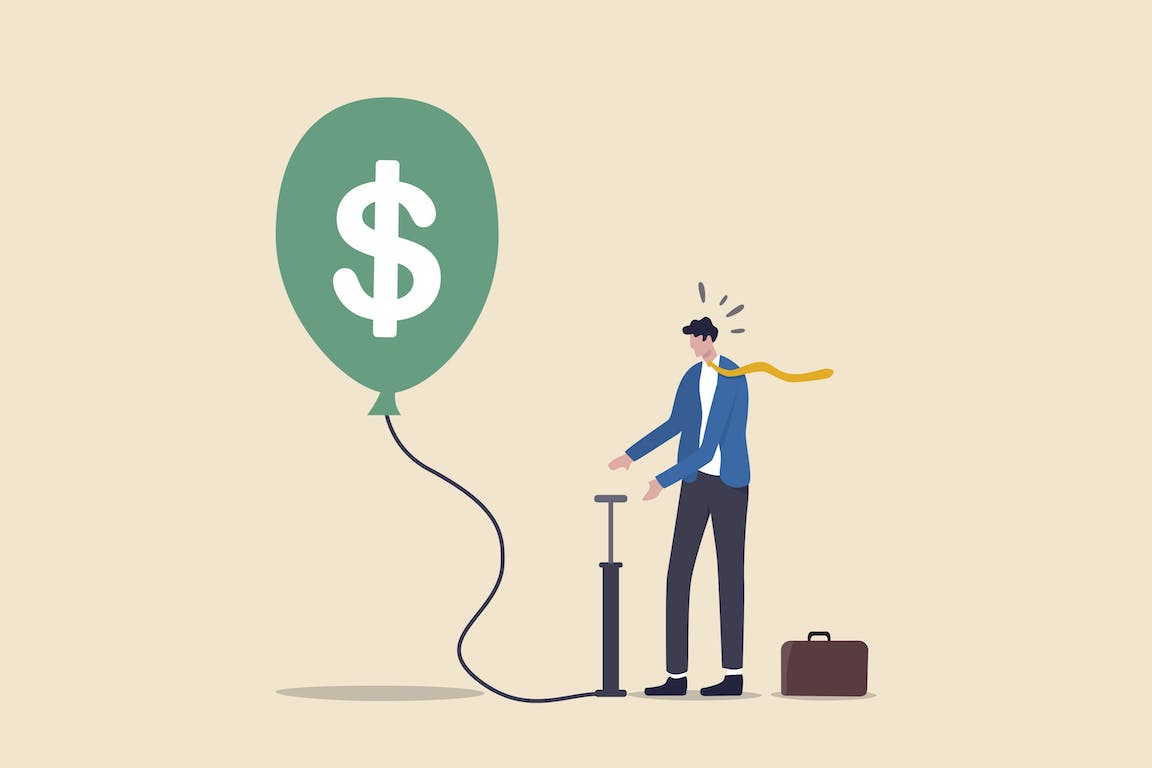 Since the COVID-19 crisis and the war in Ukraine, inflation is booming.
Author:

In the previous article, we discussed the notion of halving, i.e. the fact that miners are rewarded for their work with bitcoins every 10 minutes or so. At the time, we made the following observation: rewarding miners with bitcoins, which have not been available until now, is the equivalent of creating money. And money creation means inflation.

Inflation is a complex and topical subject, especially since the COVID-19 pandemic and the crisis in Ukraine which saw the rate of cryptocurrencies drastically drop. We will come back to this in a few lines, but for now, it is worth recalling a few facts: in 2009, when bitcoin was created, the annual inflation rate of the latter was above 100%. This figure fell below 10% between 2012 and 2016, and then dropped to around 3.8% at the halt of 2020, before finally stabilising at around 2%. Until then, many believed, with good reason, that bitcoin and crypto-currencies were real cures for inflation. This is because the fact that its protocol, its code if you like, cannot evolve prevents changes in monetary policy.

Indeed, bitcoin, like all crypto-currencies, is not susceptible to banks' methods of changing its value since crypto-currencies do not go through banks. Traditionally, in the event of a crisis, central banks buy back government bonds (i.e. debts), and to do this they create money without any real justification, out of thin air. The problem is that this new money does not respect the gold stock on which it is supposed to be based. In short, it is one more debt that feeds public or private debt, which then becomes gigantic bubbles ready to burst while GDP cannot keep up. Stock market crashes are then more and more frequent, since we never really solve the problem, we only artificially push it away.

A too high price is always impressive and discourages investors.

When it comes to cryptocurrencies, many felt that they were very resistant to inflation at the time, for the simple reason that you can't cheat the monetary policy of cryptos: it is written into its very code. Bitcoin is not based on gold, but on work, so it was thought that as long as there were people to use it, to trust the system, it was protected and could not suffer from inflation, or only very little, a bit like gold for example. This reasoning turned out to be wrong, but for reasons that are not well understood, so let's put the chronology of events in order: first of all, it is clear that bitcoin, like almost all other crypto-currencies, collapsed in the wake of the COVID-19 pandemic and the war in Ukraine, both of which are geopolitical situations that are catastrophic to say the least. Bitcoin's price fell from 61,738 in November 2021 to 31,973 in January 2022, ending its run at the time of writing at 20,130 on 26 June. That's without counting other crypto-currencies like Luna that have simply disappeared. Why this collapse?

There are many reasons, but the most obvious one is ultimately very traditional: crypto-currency investments benefited from massive support from central banks, which lent at extremely attractive interest rates, even 0% in some cases. This was primarily a political move, as blockchain technologies have enormous potential in many areas, and a number of countries were keen to develop the industry. One example is the canton of Neuchâtel in Switzerland, which has an international reputation in this field. However, with the repeated crises and generalized inflation, banks have increased their rates, making it increasingly difficult to borrow. This situation is pushing investors to de-leverage from the riskiest markets, led by crypto, into real estate, gold and other traditionally safer investments. Seeing that investors had sold out, the population lost confidence in the system, so they withdrew their investments in a hurry and the system collapsed.

Another reason for the crash is the fact that Russia has lost interest in cryptos.  Indeed, the Russians were big investors, but following the war and the resulting economic sanctions, it was clear that the asset freeze would also extend to their crypto currencies. So they started selling heavily, hoping to retain some cash before losing it all, this freed up money went to Dubai in real estate among other things. Also, a fundamental myth of cryptos fell with the crisis: the very firm belief that governments can't do anything against cryptos, because of the decentralized model. This is absolutely true, as long as the internet is left alone. When countries like Iran or Kazakhstan cut off their national network, the transfer of crypto became impossible. In the same vein, central banks have been quietly developing their own cryptocurrencies, China has already launched a "cryptoyuan" for example. Backed by the Chinese state, this crypto is, for the same reasons as a traditional currency, less likely to collapse than traditional crypto, which relies only on its own users.

Should we be optimistic or pessimistic about the crash?

What's next? Faced with these debacles, several observations are possible, and depending on the affinity of the reader, each of these analyses are quite valid. For example, one might consider that bitcoin, like crypto-currencies in general, is no longer of interest, that it was just a strange banking interlude, and that the story ends here. This would undoubtedly be a mistake: blockchain, before being a currency, is a technology, and like any novelty, it requires a certain amount of development, but to assume that it falls into disuse the second the predictions of its defenders turn out to be false or semi-correct, is to bury the beast a bit quickly. If we allow ourselves to take a step back, not so long ago the internet didn't even exist. So the fact that we are now talking about virtual universes suggests that humanity is certainly only groping its way forward, but it is doing so with enough conviction that we can be a little optimistic when it comes to new technologies.

One could also be overly enthusiastic and say that basically, the whole market is crashing, so if almost every stock on the planet is crashing, why think that cryptos are more to blame than any other sector? Basically, it's when prices crash that you should invest, so why not jump in now? As explained in our previous articles, crypto is not supposed to follow the same rules as any stock, that's the rub. If it was difficult to predict the future of the bitcoin price before the last crisis, it is now absolutely illusory to simply admit that the situation is temporary or normal. The truth is that we don't know, it depends on far too many external factors. This market relies more than any other on speculation, and the more the world geopolitical situation is unclear, the more uncertain the times, the more difficult it is to speculate. It is therefore advisable to be cautious. However, if no one believes in it anymore, the system is bound to collapse. This is a devil that is difficult to counter: the longer you wait for the market to stabilise, the less you invest, and the more you accelerate the market's fall. There are no viable solutions that have been found in finance to counter this problem.

So what to do? To begin with, admit that we don't know everything and that it is necessary to keep an eye open and to inform ourselves, to document ourselves. To do this, I invite you to take a look at the other articles on this site and to document yourself. It's the best way to prepare for the future because if we can't predict it, we can at least improvise a little more elegantly than if we're always surprised. I'll see you soon for a future article on the subject of crypto security.