The security of the Blockchain

The security of the Blockchain 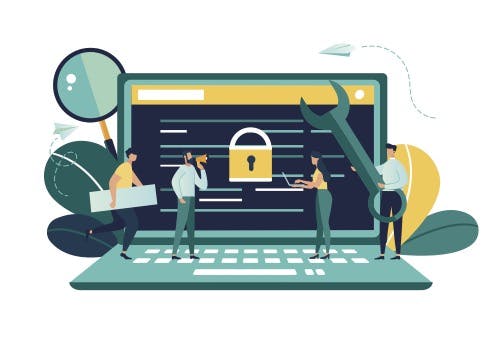 If a currency was not secure, the system would collapse.
Author:

In the previous article, we looked at the impact of inflation on the cryptocurrency system. However, one question remains: what about security? In the internet age, where everything is computerized, couldn't a simple hacker get into my computer and steal all my money? Also, couldn't there be a global bug that would wipe out all of this virtual currency?

The question of the security of a decentralized banking system is more than legitimate: because of the horizontal organization of the system, there is no control or regulation entity like in traditional banks. Comparisons are often made between crypto-currencies and e-banking, but these are not very relevant: e-banking is a platform managed by your bank. Your bank checks certain transactions that it finds suspicious. Your banker can (and most likely will) reach out to you if he has any questions. For example, if you suddenly receive USD 200,000 in your account when you usually only receive USD 4,000 per month, it is quite possible and even normal for a banker to call you and ask for explanations, as part of the fight against money laundering and tax fraud in particular. So, there is an administrative entity above you that checks your transactions, whether they are virtual or not.

But cryptos don't work that way: there is no dedicated control entity, no one to check where your bitcoins or other crypto-currencies come from, or what you do with them. This state of affairs is deliberate: one should not lose sight of the origins of bitcoin and especially the philosophy of its first users: bitcoin comes from a very libertarian idea of the first users of the internet and the hackers. The internet, when it was created, was a virtual world without any rules, governments or clear hierarchical structures. A real novelty for the world, a discovery comparable to the “discovery” of America by Christopher Columbus in its repercussions: there is a new land to explore when we thought we had seen and done everything, who knows what this new world has to offer? In this state of mind, the first "colonists", the first regular users of the web, quickly grew wings of independence. The idea of freeing themselves from the old world and the old ways of thinking is a direct and natural consequence of this discovery. And this change of paradigm necessarily involves a change in the usual approach to the economy, because whether we like it or not, the economy is taking up a huge amount of space in our culture and society. Thus, there is a real desire on the part of users of crypto-currencies not to be subject to a superior control body, because this would mean returning to a classic model, the old model.

This has two major consequences, one positive, and the other negative. The negative one is obvious: cryptos are particularly popular among criminals, as there are no bankers to report to the IRS or the police. The positive one: they offer a space of economic freedom that is incomparable and unrivalled today. In an age where people like Edward Snowden have warned and are still warning about the involvement of states or private companies in our lives, having a space of non-surveillance, a virgin and new land, represents in the 21st century, 6 centuries after the discovery of America, a real miracle.

Christopher Columbus when he "discovered" America in 1492

And what protects Bitcoin? It is based on a cryptographic algorithm. The principle is simple: a message, in this case, the value of bitcoin, is "coded" in a mathematical function, in order to hide its meaning. For example, the mathematical function will say, if our secret message is the word "Apple", that each letter must be replaced by a number equivalent to its place in the alphabet. Thus, "Apple" becomes "0116161205". Once encoded, the message is sent to the recipient, who will never be able to retrieve the message unless he or she has special, secret software that can read and decode the original mathematical function to render the word “Apple”. The idea here is that the first function, called a "key" in computer language, is public, while the second key, to decrypt the message, is private and kept secret, in the hands of its sole owner. The private key can be used to calculate the public key, but not vice versa.

However, to receive a bitcoin or other crypto, you need an address to have it sent to. Here, the system is similar to traditional banks: it is simply an account where a transaction indicates the amount paid to another bitcoin address. But, unlike banks, this transaction also incorporates all previous transactions of that bitcoin, proof that the necessary funds are in fact owned, and this circulation is kept public on the network, the Blockchain. This system is incredibly secure, but there is one small hitch: you absolutely must not lose your key! Unlike a centralized system, where if you lose your password you can always call the bank to get a new one, here every one is responsible for their bitcoins. This is a security advantage of bitcoin: if someone manages to break into a bank, he can steal all the passwords that are stored there, since the bank knows them. In the case of bitcoin there is no entity that has all the passwords, in the worst case, a thief will only be able to steal those of one person, in the hypothesis, for example, that he has lost his private key.

A little clarification: we often speak of "virtual currencies", implying that it does not really exist, because it has no physical existence. This is a misnomer. Crypto-currencies exist as much as gold or silver, they have value and power. They are indeed speculative objects, but this is also the case for current money: nothing has intrinsic "value", this notion is only a common agreement between several people. What gives value to the dollar is the confidence that the world has in its existence. Nothing prevents us from deciding overnight that the primary currency for our exchanges will be sand or water, people just must be convinced of their value. The same goes for gold for example. Our current system is based on gold, why gold? Why not a diamond for its rarity? Why not emeralds for their aesthetics? Gold was never "chosen", it was simply culturally imposed in Europe, and the Europeans imposed it on the world. The Aztecs did not use gold coins as currency, yet Latin America was full of them before the arrival of the Spanish. There is absolutely nothing to prevent us from considering that a computer code has value, as long as it is not ephemeral and insecure. This is good news, as the system is intended to be forgery-proof and password-independent, almost indestructible except for its dependence on the Internet and energy. In this sense, crypto-currencies are not really "virtual" currencies but rather "digital" currencies.

So, is it the most impenetrable and secure system there is? Absolutely not, it is simply no less secure than any other, neither in its philosophical conception, nor in its fundamental value, nor without its technical aspects. To counter it, it is always possible to cut off the internet as in Kazakhstan. It also depends on ecological resources, as it consumes a lot of energy, like any other currency. Finally, it is subject to the same paradigm shifts as the centralized system: if one day humanity discovers a new “continent” to explore, there is no doubt that another form of finance, unknown today, will replace it. Also, it is still full of flaws. We will likely recognize its potential criminal use and admit that it is necessary that someone takes charge of a minimum of control, to the great displeasure of the most libertarian of its users who would then see history repeating itself. Because who is going to watch the watchdogs?

In the next article, we will explore this paradigm idea in more depth and discuss the complex notion of the 'smart contract'.